The Zouave is a mercenary ranged infantry unit in Age of Empires III: Definitive Edition added by update 23511. It is a Rifle Infantry unit, but has no multipliers against any unit despite their role.

Zouaves have a strong base attack, high ranged resistance and low range when compared to most Skirmisher-type units. They have no multipliers, including the common negative multiplier the Rifle Infantry have against Cavalry, making them a soft counter against them, but also a hard counter to Heavy infantry units due to the slightly higher range and base attack. They perform as a solid general purpose infantry, but at a cost of 300 coin.

Zouave image from the Compendium section 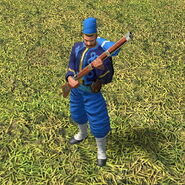 An in-game Zouave
Community content is available under CC-BY-SA unless otherwise noted.
Advertisement