Zhi is a protagonist in the Tale of the Dragon campaign in Age of Mythology: Tale of the Dragon. Initially, he works under Danzhu's control but is rescued by Jiao-Long and Shun. He functions similarly to a Priest and is crucial for maintaining the health of the player's army.

Zhi first appears as the antagonist Mysterious Monk in the scenario From Below where he is seen performing rituals on Mysterious Holes. After Jiao-Long and Shun stop him, he introduces himself and reveals that the holes belong to Dilong, the Earth Dragon, and he was performing the ritual to summon Dilong for Danzhu. Jiao-Long and Shun then offer Zhi protection against Danzhu, he accepts to join them and then proceeds to summon Dilong for them instead. Zhi afterwards follows Jiao-Long throughout the remainder of his journey to restore Yin and Yang. 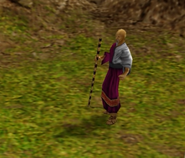 Zhi in Tale of the Dragon
Community content is available under CC-BY-SA unless otherwise noted.
Advertisement