Age of Empires Series Wiki
Register
Don't have an account?
Sign In
Advertisement
in: Age of Mythology, Huntables, Age of Empires II,
and 3 more

2-4
The Zebra is introduced in The African Kingdoms.

Just like Deer, Zebras run away when hunted and take two arrows to be killed. They come in packs of at least three. It is advisable to either push them towards a Town Center or Mill with a military unit or build a Mill nearby and hunt them with at least two Villagers in order to save time. Zebras appear on African maps.

Villagers hunting a Zebra in Age of Empires II

A group of Zebras

1-2
The Zebra is a large equine animal living in Africa. In Age of Mythology, it's an animal found in desert, and Savannah biome-base maps and scenarios (such as Watering Hole, Savannah, Nomad). It is recommended that the player builds a Granary, or move an Ox Cart near them, and use at least 8 hunters (for maximum efficiency) to gather the food from the Zebra herds.

It doesn't fight back, and gives a decent amount of food, so it's excellent as a huntable. 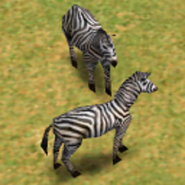