The Zamburak is a ranged light cavalry in Age of Empires III: The Asian Dynasties that is unique to the Indians and can be trained at Caravanserai and Galleon, as well as the Agra Fort wonder once it is upgraded to Delhi Gate. It is the Indian equivalent of the Dragoon.

The Zamburak is extremely fast and cheap but has fewer hit points than other cavalry units, and only uses up one population slot. Its mounted gun gives the Zamburak good range, and it inflicts the most damage against heavy cavalry.

Zamburaks are incredibly strong for using only one population, but they are also rather niche in that they only have an attack bonus against hand cavalry and coyote runners. The Disciplined upgrade is required before an attack bonus versus artillery is provided (unlike other ranged-cavalry which intrinsically have such a bonus).

Imperial Service (passive): The Mansabdar Zamburak increases the hit points and attack of Zamburaks in a radius of 24 around him by 10%.

As (Mansabdar) Zamburaks are unique to the Indians, only technologies that they have access to are shown in the following table:

As (Mansabdar) Zamburaks are unique to the Indians, only their cards and other civilizations' TEAM cards are shown in the following tables: 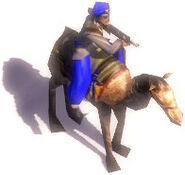 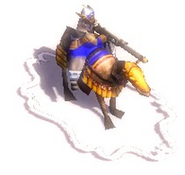 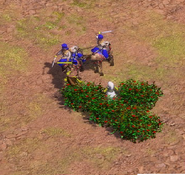