6
The Yurt is an unconstructable building in Age of Empires II. Like Houses, Yurts provide five population. They cannot be built in normal gameplay, however, they are available in the Scenario Editor and can be found in some campaigns.

Some technology upgrades apply to Yurts, as they serve the same function as Houses.

Yurts are clearly intended to create a nomadic atmosphere, thus their main appearances are in camps of Central Asian peoples (Mongols, Turks, Huns, Tatars and Cumans).

Battles of the Conquerors[]

Battles of the Forgotten[]

The Forgotten introduces the Steppe, a map similar to Nomad but without water, where players begin without a Town Center and scout unit and three extra Villagers. They also begin the game with three Yurts.

Yurts in a settlement in Crucible 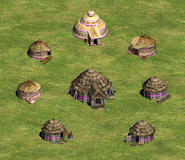 The same in the Definitive Edition
Community content is available under CC-BY-SA unless otherwise noted.
Advertisement