Yucatán is the peninsula in southern Mexico which juts out into the sea, separating the Caribbean from the Gulf of Mexico. It is the home of many civilizations, most notably the Mayans.

In Age of Empires II, Yucatán was introduced as a random map that features plenty of food resources. The start-up food sources for each player is basically double the normal amount of each item (8 Deer instead of 4, 12 Berry Bushes instead of six, a herd of 8 Turkeys instead of 4 small herdables next to the Town Center and 3 herds of 3 Turkeys nearby, instead of 2 pairs of hidden herdables), except for aggressive huntables, as there is only one extra Javelina, for 3 in total, and not 4. The map also depicts large jungle forests, so wood is also plentiful. Apart from the initial extra food sources, the map also randomly generates pairs of Javelinas scattered through the map.

Rivers or partial rivers divide players. Most of the time, there are gaps of land that cross those rivers, but it is not unheard of that sometimes a player starts completely isolated on an island formed by the river. Sometimes, small lakes are also generated. Cliffs are absent from the map, but elevations of various sizes can be found; however, most of the map is evenly flat.

Jaguars can be found scattered all around the map, sometimes coming in pairs. Relics are present in normal numbers, and the same goes for Gold and Stone Mines, as those can be found in normal amounts.

Yucatan allows for massive fights, due to its unusually rich resource deposits. It often ends in a big battle between two strong Imperial Age civilizations, in which superior (and costly) units coupled with massive assaults make or break games.

The map tend to favor Turtle and Booming strategies in detriment of early Rush tactics. Usually, players are able to wall very early, due to the presence of rivers and large forests; and the abundance of food also allows for performing a Fast Castle Age, followed by a Boom.

However, river assaults and landings can be done, so players must also be wary of opponents' navies. Early raids are sometimes viable, but aggressive players must be quick to prevent opponents from walling.

Civilizations that have advantages in Yucatan:

Civilizations that may struggle in Yucatan:

In Age of Empires III, it is a random map type, with a strip of land down the middle and seas on both sides.There will be plentiful Salmon and Whales on both sides of the seas.

It is heavily forested, and there are plenty of Capybaras and Tapirs that roam in the forests.

For every player in the map, there will also be a Maya or Aztec (Zapotec in The WarChiefs) settlement near the player's starting position. Players will usually have trouble building a proper colony due to the massive amount of trees on the map. In free for all matches, this is further hampered with players starting extremely close to each other.

A Trade Route cuts through the middle of the land strip, containing either two or three trade sites. 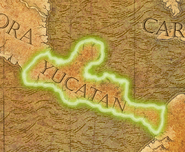