Congo Basin
Gold Coast
Lake Chad
Niger Delta
Niger River
Savanna
The Yoruba are a native African settlement found in Age of Empires III: Definitive Edition - The African Royals. Like all natives, they can be allied with by building a Trading Post at their Trading Post site.

The Yoruba are also an Industrial Age Alliance option for the Hausa. Allying with the Yoruba to advance into the Industrial Age or Imperial Age allow Oyo Legionaries and Eso Riders to be trained at the Palace and Native Embassy, and the Twins and Wrestling technologies to be researched at the University. 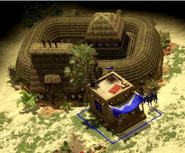 A Yoruba settlement
Community content is available under CC-BY-SA unless otherwise noted.
Advertisement