Age of Empires Series Wiki
Register
Don't have an account?
Sign In
Advertisement
in: Age of Empires III, Mercenaries, Cavalry archers,
and 3 more

The Yojimbo is a Japanese mercenary ranged cavalry in Age of Empires III: The Asian Dynasties. It is an hybrid of Cavalry Archer and heavy cavalry (particularly to Cuirassiers) in some respects.

The Yojimbo can be trained at the Stable and Monastery with the Atonement Home City Card.

At first glance, the Yojimbo might seem as a superior version of the Yabusame, but in reality, it plays more like a highly improved, mercenary version of the Cavalry Archer. The Yabusame itself is more comparable to a Culverin, as it has a very high bonus versus artillery combined with a good range and strong ranged resistance (50% to be precise).

On the other hand, the Yojimbo is meant to be a shock unit, quickly destroying enemy cavalry and artillery with arrow volleys, and when enemy light cavalry or infantry arrive in the battlefield, going for the kill in melee combat, where they particular excel, as they have great melee armor, combined with a strong attack, but most important of all, area damage.

Not unlike Cuirassiers or other cavalry in Trample Mode, this makes them excellent against masses of weak units, such as Strelets or Otontin Slingers.

All in all, Yojimbos are spectacular mercenaries, but by no means should they replace Yabusames, as they are much more expensive, and not as cost effective against Artillery, while larger masses of Light Cavalry may wreak havoc on Yojimbo.

In the Japanese campaign, they are featured in the first scenario as woodcutters who were going to be executed for rebelling. When they are freed, they will make a remark about regaining their honor and join your forces.

As Yojimbo are unique to the Japanese, only technologies that they have access to are shown in the following table:

As Yojimbo are unique to the Japanese, only their cards and other civilizations' TEAM cards are shown in the following tables: 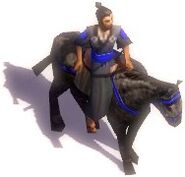 A Yojimbo under white background 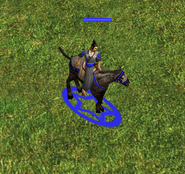 It is possible the the Yojimbo was based on Sanjuro from the namesake 1961 Jidaigeki film
Community content is available under CC-BY-SA unless otherwise noted.
Advertisement