Age of Empires Series Wiki
Register
Don't have an account?
Sign In
Advertisement
in: Age of Empires II, Yodit, Infantry heroes,
and 2 more

Yodit is a campaign in Age of Empires II HD: The African Kingdoms. It focuses on the semi-legendary exploits of the real-life Gudit (Ge'ez: ጉዲት; Amharic: Yodit, lit. "Jewess"; reigned ca. 960), an enigmatic non-Christian (thought to be Jewish and Beta Israeli; so of the Kingdom of Semien) Ethiopian queen believed to be the cousin of the founder of the Zagwe dynasty, Mara Takla Haymanot, according to one tradition. Gudit is notorious for causing mass destruction over much of Aksum and slaughtering the Aksumite Empire's ruling dynasty before becoming a queen herself for reasons not yet clear to the present day due to the contradictory and incomplete nature of information about her.

Nevertheless, Gudit is so feared by the Ethiopians to the point that her name is usually translated to "fire" and "destruction" in Amharic, and her reign of terror is still widely remembered from various oral traditions and historical accounts recording her actions.

6
Yodit is an infantry hero in Age of Empires II HD: The African Kingdoms. She had the appearance of a Gbeto and is only available in the Scenario Editor. Since the Definitive Edition, she has a unique model similar to a Gbeto. As a hero, she cannot be converted and can regenerate health.

Note that this unit does not actually appear in the campaign. There, Yodit is represented by Princess Yodit, a Queen incapable of attacking. 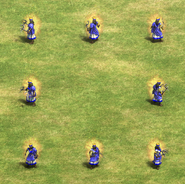 Yodit in the Definitive Edition

A painting of Yodit circa 1400s.
Community content is available under CC-BY-SA unless otherwise noted.
Advertisement