Age of Empires Series Wiki
Register
Don't have an account?
Sign In
Advertisement
in: Age of Empires III, Maps, Tale of the Dragon,
and 2 more

Yellow River is a map in Age of Empires III: The Asian Dynasties and Age of Mythology: Tale of the Dragon. In each game, the map features a central river with two banks.

On one bank, all teams, friend and foe, have their main Town Centers relatively close to one another and a limited number of resources available, with animals including some Pigs and Deer.

One the other, larger bank, are additional Settlements, Relics, resources, and Yaks to be found. The straight river also has a few pools of fish, Mahi-mahi to be precise. Huntables include more Deer and Ducks, the second found on the coasts of the major riverbank, and there are also Lizards, that may attack careless workers. Trees found are Jungle Trees, native to Chinese maps.

Players must choose whether to immediately attack the enemy or escape to the other side of the river to expand their operations.

Colonizing the east bank on Yellow River in Age of Mythology

The Yellow River also features in Age of Empires III, but with a twist: the game has the chance to generate (including in Scenario Editor) either a "dry season" or a "flood season" map.

The map has two main banks, on which each side starts. On each end of the central river are two islands, each with a Native Settlement and a Trading Route.

Huntables are rich in both variety and numbers, and trees are also found in decent quantity, including Bamboos and ginkgo forests.

There is also a central island, connecting each of the landmasses divided by the river, where extra resources (including Treasures) can be found, as well as a sole Native Settlement. This island often becomes an important point of focus, as apart from providing extra resources, it also provides a dependable and easily defended base of operations.

The flood variant of Yellow River is largely similar to the dry one, concerning the layout and the available land resources, but the focus of the map somewhat changes.

Unlike the "dry season" map, the central island is non-existent. Instead, the central island gives its place to water, where Shipment Drop Points are featured. These essentially push players to invest in a navy, and naval Home City Cards. The new focus on this map is to control the waters, in order to constrict enemies' expansion, but also to better defend the Trade Routes, with both land and naval units.

Also, Carps and Catfish can be found swarming along the banks, allowing Fishing Boats to gather them.

2 types of native religious settlements can be found in the map, regardless of the season. A Shaolin temple can be found on the map offering Rattan Shields, as well as a Zen Temple offering Sohei Naginata. The Zen Temple's placement is ideal for defending the adjacent Trade Routes, especially from cavalry attacks.

Ibex present near the river bank

A Shaolin settlement near the river bank

Rocky outcrops along the river shores

Catfish present during the flood season 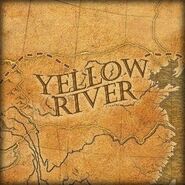 The Yellow River from the map selection menu
Community content is available under CC-BY-SA unless otherwise noted.
Advertisement