Year of the Goat

The amount of Goats spawned changes depending on the Age the power is cast in, not unlike the Dwarven Mine.

This leaves players with different options as to when they need to use Year of the Goat. On a map like Oasis, with few animals available to hunt, they may cast this power earlier to have a more reliable source of food. On maps like Tundra, they may instead save Year of the Goat for when the plentiful wild animals have been depleted, so that they do not have to resort to farming until later. Regardless, it should always be cast in a secure area, as the Goats can be stolen by enemies. 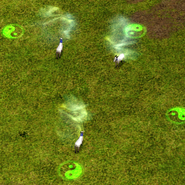 Year of the Goat when used in the Archaic Age
Add a photo to this gallery
Retrieved from "https://ageofempires.fandom.com/wiki/Year_of_the_Goat?oldid=233549"
Community content is available under CC-BY-SA unless otherwise noted.