Players should build the Market in a safe corner of the map from where the Yaks will travel to a Town Center of choice. The greater the distance of the trade route, the more gold will be generated.

This is especially valuable later in the game when safe Gold Mines run out. Caravans can also trade with ally Town Centers and doing so generates 50% more Gold than usual. Caravans may replace Peasants if too many are found idle once gold runs out but they cannot defend themselves from attackers and must be protect from raids.

Nü Wa enables Yak Caravans to be trained in the Classical Age. 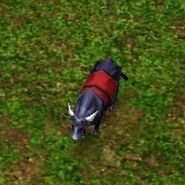 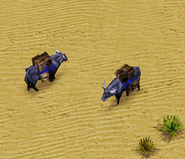 Yak Caravan carrying gold
Add a photo to this gallery
Retrieved from "https://ageofempires.fandom.com/wiki/Yak_Caravan?oldid=326046"
Community content is available under CC-BY-SA unless otherwise noted.