"Japanese master of the bow and the horse. Good against cavalry and artillery."
—In-game description

The Yabusame is a mounted archer in Age of Empires III: The Asian Dynasties that is unique to the Japanese and can be trained at Stable and Atakabune, and by a Daimyo once the Fortress Age is reached. It fires a bow from long range.

The Yabusame has one of the longest range of all cavalry in the game, but also has a low attack and hit-points. It is more powerful than most other cavalry archers due to its long range and the large multiplier against artillery. Like all of the ranged cavalry units it is also very good against other cavalry, but is better than most due to its exceptional range.

Their base hit points and attack are not exceptional, but there are many shipment cards which can increase their hit points and attack. Their attack can be boosted to 24, and hit points to 400. These statistics stack with the many auras and passive bonuses that Japan has access to, allowing them to become quite a powerful unit if properly invested in. In the Fortress Age, without Home City upgrades, they can reach over 12 attack, which gives them similar damage to cavalry as an Eagle Runner Knight or a Cavalry Archer, simply by using the Golden Pavilion and Daimyo bonuses. With cards, another 40% attack can be added (made even more powerful from auras stacking on the upgraded stats), making them potent long ranged anti-cavalry and anti-artillery support.

Yabusame combine well with Yumi Archers, which cost no coin; this can allow for massing of Yabusame with relative ease. A standard European Dragoon costs 180 resources each, while a Yabusame costs 210 (which can be lowered with the Shogunate Wonder). With Japan’s powerful economic bonuses, this small cost difference can often be considered negligible.

The Yabusame is automatically upgraded to Disciplined (+20% hit points and attack) at the Fortress Age.

As Yabusame are unique to the Japanese, only technologies that they have access to are shown in the following table:

As Yabusame are unique to the Japanese, only their cards and other civilizations' TEAM cards are shown in the following tables:

"Yabusame is the ancient art of archery, or Kyudo, while riding on horseback. “Kyudo” is Japanese for “Way of the Bow.” The history of Yabusame is rooted in legend, beginning around 530 CE, when it is believed that the 29th emperor of Japan, Kinmei, prayed for "Tenka-taihei" (peace) and "Gokoku-houjyou" (good harvest) and then fired from horseback at three targets. The art of Yabusame has never strayed far from its roots and even today is perceived foremost as a ritual honoring the gods and calling forth their blessings.

Minamoto No Yoritomo, first of Japan’s feudal shoguns, had great respect for the art of Yabusame and worked to establish it as a part of standard military training and practice. During his reign, Minamoto established the Ogasawara School, a specialized institution for teaching the arts of foot and mounted archery. He also started the Tsurugaoka Hachimanguu Yabusame Divine Performance, a showcase for the most highly talented Yabusame archers. The first event was held on August 15, 1187. Since that day the ceremony has been held every year to the present, although it went on temporary hiatus during the Pacific conflicts of World War II." 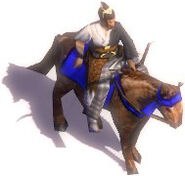 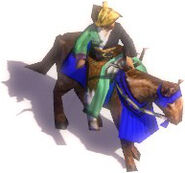 Yabusame concept art
Add a photo to this gallery
Retrieved from "https://ageofempires.fandom.com/wiki/Yabusame?oldid=263983"
Community content is available under CC-BY-SA unless otherwise noted.