The Xolotl Warrior is a heavy cavalry unit in Age of Empires II: Definitive Edition that can be trained at Stables converted by American civilizations. It has the same statistics as the Knight and also appears in the fifth scenario of the Montezuma campaign, The Boiling Lake (replacing the Elite Tarkans present before the Definitive Edition).

The Xolotl Warrior is ordinarily available to the Aztecs and Incas, as they have access to Redemption and, therefore, the ability to convert enemy buildings. Mayans can train the Xolotl Warrior from Stables placed in the Scenario Editor, in MegaRandom maps if starting with a Stable, or in Stables captured in Battle Royale mode. The Xolotl Warrior is considered a regional unit.

Like the Knight line, Xolotl Warriors are a somewhat powerful and versatile addition to almost any army composition. Their high attack and speed make them excellent for assaulting and flanking, along with high hit points and damage resistance to provide a perfect meat shield for ranged units and siege on the frontline.

Also suffering from the same pitfalls as the Knight line, Xolotl Warriors are hard-countered by Halberdiers and Camel Riders, vulnerable to conversion by Monks and can be overwhelmed by massed archers (if used in small numbers).

However, unlike Old World heavy cavalry, Mesoamericans lack further upgrades like Cavalier, any defensive armor upgrade in the Blacksmith, Bloodlines and Husbandry, making the unit subpar compared with the Knight line in late Castle Age and Imperial Age.

In a normal game situation where the Stable has been brought by conversion, and not placed through Scenario Editor or in Mega random games where the player may start with a stable, the following depict some technologies which the player might think will affect this unit, but actually do not.

In case the stable is the player's own, that is available through scenario editor or as a part of luck in Mega Random games, the following bonuses become significant:

Despite the resemblance to Knights, Xolotl Warriors do not belong to the Knight line of cavalry and are allotted the same slot as the Scout Cavalry line in the Stable. Therefore in any game mode, they do not enjoy any team bonus benefiting the Knight line: 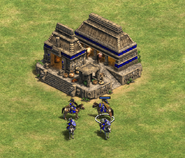