Grants victory if defended for 200 years

The Wonder is a special building in Age of Empires II that becomes available upon reaching the Imperial Age. In specific game modes, the Wonder grants victory if built and defended for 200 years. Wonders cannot be converted.

Each civilization builds a Wonder of historical relevance and unique appearance.

Wonders only serve as a victory condition, and as such they are only useful in game modes that allow that kind of victory. When a player starts to build a Wonder, every other player receives a notification with the location of the Wonder so they know where to steer their aggression. AI allies, if they have enough resources and technologies, will madly start building towers, Castles and walls of maximum quality to defend their civilization, even if the Allied Victory is not activated.

Wonders should be placed in a well-defended area, so it is better to first build up a strong fortification composed of Castles, walls, and towers, essentially a late-game turtling strategy. In any case, the player must be prepared to be the main focus of all enemy attacks and prepare to defend the Wonder. It is advised to have a huge army to defend against attacking armies, particularly siege units. Since the Wonder takes incredibly long to be built, it is advised to build it with as many Villagers as possible, and once it is finished, a few should be left nearby in case the Wonder needs repairs. In team games, the support of allies while defending is highly valuable.

It is possible (but costly) to build more than one Wonder so that if one falls, other Wonders can stand for the time required to win the game. In The Conquerors, if the player has multiple Wonders and one is destroyed, the timer will reset but still be displayed. Although highly unlikely, if multiple players finished their Wonder at the same time, the player in the highest slot regardless of the color wins once the countdown ends.

A Monument can be found in the Scenario Editor and some campaigns. Its appearance varies being different for each civilization, much like the Wonder, and it has the same icon, although it merely functions as decorative. It has 9999 hit points, making it the bulkiest building in the game.

Wonder: Temple of the Great Jaguar

Wonder: Temple of the Sun at Macchu Picchu

Wonder: Gol Gumbaz (in The Forgotten and The African Kingdoms)

Wonder: Brihadisvara Temple (from Rise of the Rajas to Dynasties of India) 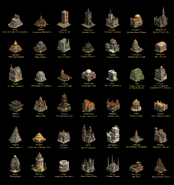 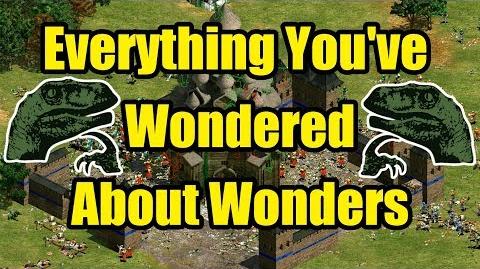 Everything You've Wondered About Wonders