Age of Empires Series Wiki
Register
Don't have an account?
Sign In
Advertisement
in: Age of Empires, Iron Age, Wonders

Allows the player to win the game if left standing after the time limit.

500
The Wonder is a massive structure that can be built in the Iron Age in Age of Empires. It greatly increases the player's score, and is a victory condition in Random Map games. It has a very high amount of hit points, yet no attack, and it takes a very long time to build and repair. If it is constructed and stands for two thousand years, the player will automatically win the game.

Wonders require 1000 wood, 1000 stone, and 1000 gold to build. As such, it is highly recommended that the Wonder be built as far away as possible from the enemies near the heart of the player's city, as they will mount a relentless assault on it until it is brought down. Wonders are among one of the few buildings that cannot be converted by Priests. If a player's Wonder is destroyed, the player does not lose the game, although the player does not receive any resources back. The wonder represents the prestige of a player's empire.

If a player attempts to build a Wonder, all players in the game will receive a notification, and the Wonder's foundation will be revealed as well. Clicking on the foundation will give other players a clue on how close the Wonder is close to completion, since it will reveal its hit points. Once the Wonder has been completed, all players will gain line of sight on the area around it, and not kept behind the fog of war.

In Age of Empires and The Rise of Rome, the appearances of a Wonder is determined by which cultural group its civilization belong to, resulting in five different possible variations of the structure, depending on the civilization's architectural style.

A Wonder is a massive structure, a crowning achievement of technology, resources, and construction time for civilizations who build one. Examples of historic ancient Wonders that have become icons for their civilization are the Egyptian Pyramids, the Great Wall of China, and the Athenian Acropolis.

A Greek Wonder being destroyed in the Wonder scenario

The Mesopotamian Wonder as seen in Ctesiphon, the Sassanid capital during the Ransom at Ctesiphon campaign

A Roman Wonder in the Definitive Edition

A Greek Wonder in the Definitive Edition

The Egyptian Wonder, the Great Pyramid of Khufu

The Greek Wonder. While not matching any monument that ever existed, it was likely inspired by the Colossus of Rhodes 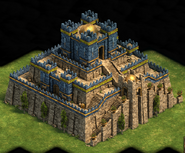 The Babylonian Wonder, the Ziggurat of Ur 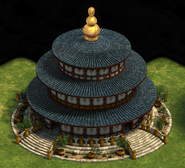 The Asian Wonder, the Temple of Heaven 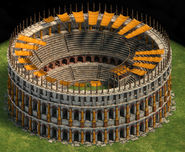 The Roman Wonder, the Colosseum
Community content is available under CC-BY-SA unless otherwise noted.
Advertisement