In Age of Empires II, the Wolf appears in several areas around the world, being generally the most common of the "hostile" wildlife. It has 25 HP, 3 attack, and holds no food, but attacks Villagers and sometimes other units on sight (except Scout Cavalry, Monks, Trade Carts, and siege weapons). A single Wolf can kill a Villager if it lands the first hit, but will die to anything stronger, even a Villager with the Loom upgrade. Magyar Villagers always kill Wolves in one strike due to their civilization bonus.

The Wolf has a Line of Sight of 4 on Easiest difficulty, 6 on Easy difficulty, and 12 on every other setting. They are often found in groups, which makes them a greater threat.

As Wolves automatically attempt to attack the nearest unit, they can be lured to the enemy base by sending a single Villager or a non-scout military unit that will attract all the Wolves in its path. The unit will die, but if it reaches the enemy side, it will deliver all the Wolves to the enemy. This strategy is particularly useful on some closed maps like Black Forest or maps where there are a lot of Wolves like Gold Rush.

There are stronger variations of Wolves that are not generated on random maps and are only present in campaigns and the Scenario Editor. 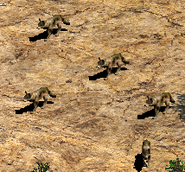 A group of Wolves in the first Genghis Khan scenario, Crucible

A render of the Wolf model 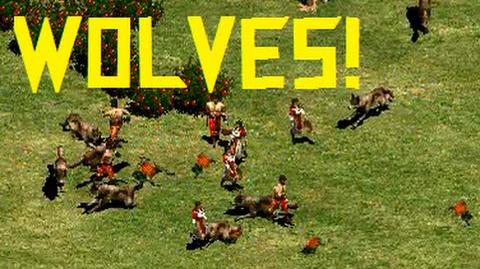 Wolves in Age of Empires 2 HD 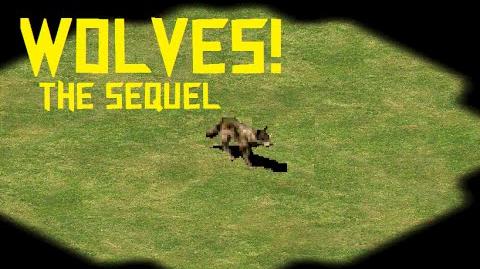 3-5
In Age of Mythology, the Wolf is a huntable animal. At appears on Norse and Greek maps, holds 100 food, but attacks villagers on sight.

On the map Alfheim, Wolves are found in excessive numbers, making them even more deadly. Also, they tend to lurk close to the central cliffs with Gold Mines in Anatolia.

The god power Fimbulwinter will summon a lot of fierce Wolves that attacks the enemy Town Centers.

On some campaign maps, the Arctic Wolf appears, in two versions. It is similar to the regular Wolf, but slower, gives slightly more food (125), and attacks any unit that comes too close, not just villagers. They can also be found on the Tundra map, using a second version of the unit.

A pack of three Wolves

A native warrior guarded by a Wolf

Wolf portrait in the Age of Empires III beta

1.5
Buck is a pet Wolf in Age of Empires III. He is available from Treasures, and has an attack bonus against Treasure Guardians.

Buck is also one of the most common, as he may be found on the majority of North American maps, such as Saguenay. Lakota players can ship six Wolves from their Home City, whereas Haudenosaunee players have access to a card named "High Chief", available in the Exploration Age, that allows their War Chiefs to train pet Wolves. In sizeable groups, they can fell even powerful Treasure Guardians.

Buck is useful in actual combat as it help players defend Aennas from cavalry when Tomahawks are not available. Wolves and Aenna is a very good combination because they both cost food. Wolf pets can sometimes replace Kanya Horsemen as they are good against small numbers of ranged infantry as archers and Skirmishers and they can also fight against Pikemen, an advantage that Kanya Horsemen lack. Wolves are also useful in later Ages as they can be used as cannon fodder, distracting enemies from more important units, such as Light Cannons. They can also be used to change the result of a battle as they can be trained by the War Chief on the battle field very fast (15 seconds), similar to Japanese Daimyo, Aztec War Chiefs, or Indian Explorers. Pet Wolves do not cost population but have their own population limit (12). Using pet Wolves pets is an indirect way of increasing the player's population limit similar to natives.

It is important to note that despite the fact that their initial stats are not great, Wolves receives their first upgrade in the Commerce Age, making them one of the few units that have access to an additional upgrade. Buck has more health but less attack damage and cannot be upgraded through cards as Janey the Pet Jaguar. Buck however is cheaper (85 food) compared to Janey (100 food) and is more cost effective in earlier ages due to its hit points but also train time (10 seconds).

Buck the Pet Wolf is affected by War Chief Health Aura increasing his HP by 15% (17.25) and War Dance increasing his damage by up to 27% (2.43). Strangely, Wolves get 10% increased HP if Infantry Breastplate is researched at a Longhouse after the "New Ways" card is shipped.

Buck the Tame Wolf is automatically upgraded in every Age up.

The White Wolf is a special Wolf of the Circle of Ossus that appears in some scenarios of the Age of Empires III campaign. It has fewer hit points than a Buck the Tame Wolf, but has more melee attack damage and higher speed.