Age of Empires Series Wiki
Register
Don't have an account?
Sign In
Advertisement
in: Age of Empires III, The Asian Dynasties, Infantry,
and 5 more

The Wokou Ronin is an East Asian outlaw in Age of Empires III: The Asian Dynasties. It is available on the Honshu, Mongolia, and Siberia maps.

The Wokou Ronin is a soft counter to cavalry, and possesses an extremely high amount of hit points. Combined with its very high melee armor and strong attack, it is more than capable of taking down any Commerce Age cavalry (despite lacking multipliers), as well as other melee infantry such as Pikemen. The Chinese can noteably make use of them, as they have more hit points, in the Commerce Age, than a fully upgraded Changdao Swordsman or Qiang Pikeman. By adding on Compunction, Westernization and the British Consulate passive bonus, they can get in excess of 600 hit points, for only a single population slot if the Atonement card is used. The Dutch can use Wokou Ronin to great effect in the Commerce Age, making up for their lacklustre anti-cavalry. The Dutch also have access to Team Infantry Hitpoints to boost them even further to 460 hit points. This synergizes extremely well with their early Skirmishers, Banks and Hussars, making for a powerful early combination. In later ages, their Halberdiers are much more upgradeable, cheaper, are 1 population by default, and are generally a better choice.

3.0
The Masterless Samurai is the treasure guardian version of the Wokou Ronin. It is one of the more dangerous Treasure Guardians in the game. 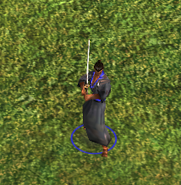