The Wokou Horseman is an East Asian outlaw in Age of Empires III: The Asian Dynasties. It is available on the Himalayas, Mongolia, Siberia, Silk Road, and Yellow River maps.

The Wokou Horsemen have relatively low damage but relatively high hit points. They are best used against cavalry, but vulnerable to heavy infantry.

"The term "wokou" is a combination of the Chinese word “wo,” referring to Japanese, and "kou,” meaning bandit or invasion.

Beginning in the thirteenth century, no group of sailors was as feared or as mighty as the plundering wokou pirates, a clan of Japanese raiders and smugglers who terrified the Chinese and Korean coasts. The first attacks occurred in 1223, triggering immediate calls for the Kamakura shogunate of Japan to corral these scoundrels and prevent further attacks on the Korean coast. In 1227, as a show of strength, the shogun had 90 suspected pirates decapitated before the visiting Korean envoy.

During the Mongol invasions of the mid-thirteenth century, wokou attacks fell, most likely due to a heightened military preparedness on the part of both the Japanese and Korean governments. But this did not last. In the late fourteenth century, as central authority in Japan weakened, the wokou took full advantage, even branching out to initiate attacks along the coast of China. They profited highly from a severe trade embargo forced on Japan by the Qin and then Ming Dynasties of China, reaping rewards as black markets flourished. The wokou experienced periods of rise and decline, even attacking China with a makeshift fleet in 1419, but ultimately became obsolete, aided by the sword hunt.

At its peak, the wokou culture was enough to threaten even the most powerful Asian ruler, and to appeal to the most ordinary of citizenry. Many men left behind their lives to seek fortunes at sea. Chinese merchants, militiamen, and smugglers, Korean pirates, Portuguese sailors, traders, and even missionaries joined up with the notorious wokou pirates."

The Mongol Rider is the treasure guardian version of the Wokou Horseman, usually found in large or resourceful treasures. They are a harder guardian to defeat due to their very high hit points, but can be dealt with if the explorer is micro-managed carefuly and better be tamed than attacked.

"The Mongol army of the twelfth and thirteenth centuries was one of the most effective fight forces of all time, centering its battlefield strategy on the tenets of flexibility, mobility, and a powerful siege. Clad in light armor, horse archers rode and fought independently of cumbersome supply lines, collecting valuable reconnaissance information as they disrupted enemy positions and sowed seeds of panic. Their tactic of swift advances and false retreats often left the steppe riders out of harm’s way but within arrow range for their attack. As the warriors attacked, mounted couriers relayed messages across various fronts and within the combined army, which consisted of a variety of different units working together.

When the Mongols prepared for a final siege, they brought engineers to the front. Siege engines and rockets were deployed to scatter enemy formations, and to isolate pockets of troops to keep supplies or reinforcements from reaching them." 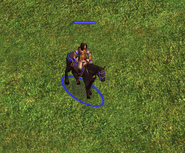 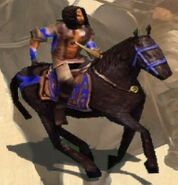 A heroic Wokou Horseman
Add a photo to this gallery
Retrieved from "https://ageofempires.fandom.com/wiki/Wokou_Horseman?oldid=260837"
Community content is available under CC-BY-SA unless otherwise noted.