The Woad Raider is the unique unit of the Celts in Age of Empires II. It is a quick infantry unit with an attack bonus against standard buildings that is produced very quickly.

The Woad Raider is one of the fastest infantry units in the entire game, only outsped by Elite Eagle Warriors with Squires. Because of this, they are very effective as a raiding unit. The standard variant has fairly similar stats to the Long Swordsman; the elite variant is most comparable to the Champion. Apart from speed, the Woad Raiders generally cost slightly more gold and more food if Supplies is researched, but have more hit points and attack in both cases, though at the cost of 1 melee armor.

Due to their high attack and HP they can hold their own against most infantry, though they pale in comparison to cavalry and stronger variants of infantry. They are also effective against siege weapons and are useful for destroying meddling Trebuchets. However, as with most infantry, their durability in battle is a drawback as they have weak armor. They are somewhat fragile to other unique infantry, mainly Teutonic Knights, Samurai, and Jaguar Warriors. As infantry units, they also struggle against heavy cavalry and massed archers.

As Woad Raiders are unique to the Celts, only technologies that are available to them are shown in the following table: 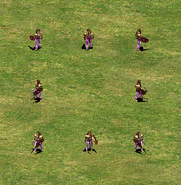 A group of Woad Raiders

Woad Raider page in the manual

A depiction of a Pictish Warrior, the inspiration for the 'Woad Raider' 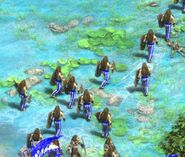 Woad Raiders in the Definitive Edition

Woad Raider in the HD Edition and Definitive Edition
Español
Community content is available under CC-BY-SA unless otherwise noted.
Advertisement