Age of Empires Series Wiki
Register
Don't have an account?
Sign In
Advertisement
in: Age of Empires II, Dawn of the Dukes, Scouts,
and 2 more

The Winged Hussar is a light cavalry unit in Age of Empires II: Definitive Edition - Dawn of the Dukes that can be trained at the Stable once the Imperial Age is reached. It is a more powerful upgrade to the Light Cavalry which replaces the Hussar upgrade for the Lithuanians and the Poles. They are quick, have decent pierce armor and high Line of Sight as well as an innate resistance to conversion and an attack bonus against Monks.

Winged Hussar do not have an Elite version; they are also considered a regional unit.

Compared to regular Hussars, Winged Hussars have +5 hit points, +2 attack, +1 melee armor, +2 bonus damage vs. Monks, and +4 bonus damage vs. gunpowder units, while costing +100 food and +200 gold and taking 10 more seconds to upgrade from Light Cavalry. It has the same advantages of the normal Hussar, but with a bit better versatility. The upgrade also improves the other non-listed stats the Light Cavalry line has. Compared to their predecessor, Winged Hussars have an attack bonus of 14 against Monks, 4 more than Light Cavalry; secondly, Winged Hussars also have a slightly higher attack speed, attacking once every 1.9 seconds instead of every 2.0 seconds. Due to their faster and better attack, a Winged Hussar without Bloodlines can defeat a Light Cavalry with Bloodlines without problem.

Winged Hussars also retain increased conversion resistance of Light Cavalry line against Monks. They need a minimum of 8 conversion cycles to convert, while other units need 4.

At first glance, it is easy to dismiss the Scout Cavalry line's usefulness as combat units. But the Winged Hussar's main advantages are its speed and cheapness. Winged Hussars can be used to skirmish small towns and small armies before they can become a real threat, they can defend against small attacks from siege weapons, and are adept at destroying small armies of archers since they move fast and have decent pierce armor. Winged Hussars are also the cavalry mainstays of Poles and Lithuanians when gold is scarce or runs out. Because of the absence of gold in their cost, they are considered trash units, and as such, they became especially important in the late game when the players must rely on their wood and food economy. They form a classic tactical rock-paper-scissors with other trash units by countering Skirmishers and being countered by Pikemen. The Winged Hussar is great when facing gunpowder units due to its small but useful attack bonus.

Since this unit is only available to Lithuanians and Poles there are certain differences that may make its use slightly different. First of all, Polish Winged Hussars have +1 attack vs archers due to their team bonus, allowing them to kill archer units faster. However, the lack of Plate Barding Armor makes them more vulnerable against arrow fire. They also benefit from their unique technology Lechitic Legacy which gives them blast damage, making their Winged Hussars highly effective in mass battles. Polish Winged Hussars also have access to Blast Furnace, which makes them shine in hand to hand battles. In the Lithuanians' case, despite lacking Blast Furnace, their Winged Hussars have Plate Barding Armor and Heresy, making them more resilient in general, especially against archers, and better against Monks.

Despite Lithuanians not being specialized Cavalry Archer civilizations, they may still employ a Winged Hussar-Cavalry Archer strategy, since Cavalry Archers cost wood and gold, while Winged Hussars need food. However, this strategy will be slightly suboptimal, as Lithuanians lack Parthian Tactics, which will not matter much when the Winged Hussars are used properly as meatshields. This is even weaker for the Poles, since they lack both Parthian Tactics and Ring Archer Armor. For the Poles, Arbalesters can be mixed in with their Winged Hussars to pick off enemy Halberdiers, while for the Lithuanians, Hand Cannoneers can be mixed to fill in the same role, albeit at the cost of food. These are suboptimal mixings, since both these units will slow down the army.

The Polish Hussars, or Winged Hussars, were one of the main types of Polish cavalry in Poland and in the Polish–Lithuanian Commonwealth between the 16th and 18th centuries.

Modelled on the Hungarian Hussars, Poland's early Hussars were Light Cavalry units of exiled Balkan warriors who came to Poland as mercenaries in 1503. Following the military reforms of the Polish king and Grand Duke of Lithuania Stephen Báthory (r. 1576–1586), the Polish military adopted the Hussar unit and transformed it into a heavily-armored shock cavalry. The husaria banners and units participated in the largest cavalry-charge in history at the Battle of Vienna in 1683 and ranked as the elite of Polish cavalry until their disbandment in the 1770s. 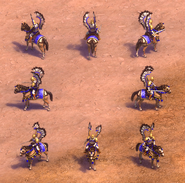 A historical reconstruction of a Winged Hussar, 2013

Winged Hussar of the Commonwealth