William Wallace (c. 1270 - August 23, 1305) was a Scottish Knight who led an army of Scots in an attempt to keep Scotland a kingdom independent from Edward I of England. He is referenced and briefly playable in his campaign, which introduces new players to the gaming experience of Age of Empires II.

6
William Wallace is an infantry hero. Originally having the appearance of a Champion, he received a unique sprite and a new icon in the update immediately preceding the release of Age of Empires II: Definitive Edition - Lords of the West. He appears as a controllable unit in the last scenario of the Learning Campaign, and as an enemy unit in the fifth scenario of the Edward Longshanks campaign in Lords of the West, where one of the secondary objectives is to kill him. He is also available in the Scenario Editor.

As a hero, he cannot be converted and can regenerate health (since The Conquerors). He is also slightly faster than a Champion.

Wallace was the strongest hero in the game until the release of The Conquerors, in which Admiral Yi Sun-Shin takes first place (albeit as a ship). With the release of The African Kingdoms, the Abraha Elephant is able to defeat Wallace in single combat, as is Le Trien from Rise of the Rajas, which puts Wallace in fourth place.

In the Definitive Edition, a renamed William Wallace appears in the Alaric campaign as the enemy Sarus the Goth (d. 413 A.D.). Sarus' forces have to be defeated in the third scenario (where he does not physically appear), and he can be fought and killed in the fifth and last scenario.

The William Wallace Learning Campaign consists of 7 scenarios. The player plays as the Celts, and the player color is blue.

The statue of William Wallace in Aberdeen

Comparison between The Age of Kings and the Definitive Edition

William Wallace in the introductory scene of Research and Technology

William Wallace as depicted in the Definitive Edition

William Wallace's arrival in The Battle of Falkirk 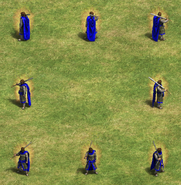 William Wallace in the Definitive Edition

For a guide to how to win these battles see strategy wiki.