Wild Camels are visually identical to Camels, but cannot be captured nor controlled by players, and have only 5 HP compared to the Camel's 50. They behave in a manner similar to Deer, running away from any unit approaching them, but cannot be hunted by Villagers and hold no food. As a result, Wild Camels are purely decorative.

Like most Camel units, the Wild Camel is a one-humped Dromedary (Camelus dromedarius) native from the Middle East. The Definitive Edition adds its Central Asian relative, the Bactrian Camel (C. bactrianus), in both domestic and wild forms. 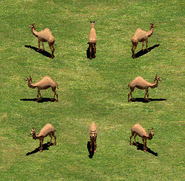 A group of Camels

Wild Camels in the reworked version of An Arabian Knight
Community content is available under CC-BY-SA unless otherwise noted.
Advertisement