The Wild Boar is a huntable but dangerous animal. Like all aggressive huntables, it only attacks when it is attacked. It has 75 hit points and 7 attack, so it is far more difficult to kill than Deer. It is essential that Villagers take it on in groups, as a single Villager cannot handle a Boar. If Boars are killed by military units the food they hold is lost, so it is important to assign Villagers with that task.

Also, Boars deal bonus damage against Eagles and cavalry, so luring them to the Town Center with scouts can even be dangerous for them. However, military units can be used to significantly reduce a Boar's hit points (but not kill it), so that Villagers can finish the Boar more easily. The Wild Boar provides 340 food, more than most huntable animals. It is recommended to gather from the Boar as soon as the player has enough Villagers to do so. Boars are a fast source of free food. Boars are so profitable that it is recommended to gather any the player can find, even in the Imperial Age.

The Javelina is an American version of the Boar, identical in all but name.

A powerful variant of the Wild Boar appears in the Attila the Hun campaign, known as the Iron Boar. It has 350 hit points, and it cannot be hunted by Villagers except in the Definitive Edition. 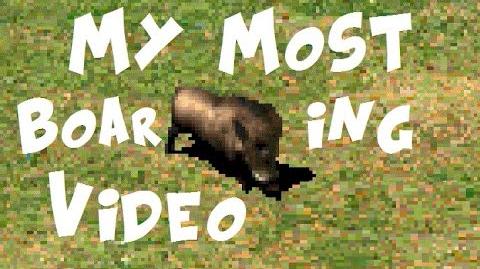 Villagers gathering from a Boar in Age of Empires II: Definitive Edition.

The Boar in Age of Mythology fights back against hunters, but not that well, and is not very difficult to take down. It is generally found in the grassy areas in Greece.

During the Fall of the Trident campaign, Arkantos and his friend Ajax are transformed into boars by the sorceress Circe, and are only turned back by a blessing from Zeus.