Age of Empires Series Wiki
Register
Don't have an account?
Sign In
Advertisement
in: Mythic Age, Tale of the Dragon, Age of Mythology,
and 3 more

4
The White Tiger is a Chinese Mythic Age myth unit in Age of Mythology: Tale of the Dragon that is available to worshipers of Xi Wangmu.

Jump: leaps towards any enemy unit within a 4–14 meters range, causing 200 hack damage to its target. Recharge time: 20 seconds.

Thanks to their high stats overall, White Tigers can take on various different units. They can accompany cavalry units in raids against enemy worker units gathering resources away from the safety of their home base. While White Tigers have equally high hack and pierce armor, they are best suited to take on human soldiers with low hack armor as the tigers deal melee damage. Archers are especially vulnerable since Tigers can close onto them quickly thanks to their speed and special attack.

White Tigers have a special jumping attack, like those of Anubites, Amanra, and Bellerophon, which enables them to strike first. This ability even allows them to jump over walls and immediately enter the base of an opponent relying on a turtling strategy. Doing so allows the White Tiger to attack worker units repairing the wall or attempting to escape a raid. If the player chooses a turtling strategy themselves, White Tigers do not need to rely on gates as they can even leap over friendly walls. Jumping also allows them to bypass units in the front lines of an army and reach the frailer units, such as archers, in the rear lines. The best counters to White Tigers are heroes and stronger myth units. 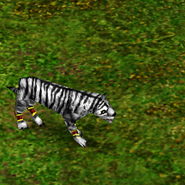