4-6
The Water Buffalo appears in the Rise of the Rajas expansion pack as the main herdable animal available in Southeast Asia. It is a big, bulky animal that offers 150 food, which is 50 more than the Sheep and the Goat. This makes it on par with the Cow in terms of food. It also has the same 14 hit points as the Cow, whereas the other herdables have 7 hit points. Consequently, Scout Cavalry and Militia in the Dark Age will find it harder to deprive a player of Water Buffalos (and Cows). 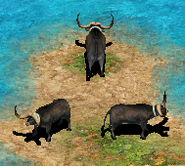 5
In Age of Mythology, the Water Buffalo is a powerful huntable animal found on Egyptian and African maps, as well as in some others, such as Marsh. They are powerful, and a Villager will not be able to kill a Buffalo single-handedly. It takes at least three to prevent fatalities, though more are recommended to avoid injuries. They hold 400 food. Unlike in other games, the Water Buffalo in Age of Mythology are wild African buffaloes rather than domesticated, actual Asian water buffaloes.

An in game Water Buffalo

1
In Age of Empires III: The Asian Dynasties, the Water Buffalo is a herdable animal, appearing wild in the Deccan map, where they can be captured. The only alternate way to obtain them, is through the Water Buffalo Ranching and Year of the Ox Home City Cards for the Chinese; the former allows Villages to train Water Buffaloes while the latter grants one for each Village and Town Center. When fully fattened, they hold 500 food, and are generally similar to the Cow. Although meant to represent a domestic Asian buffalo, the Water Buffalo model has the horns of a wild African buffalo, and the icon shows an African buffalo as well.

A Deccan village with Water Buffaloes, in three distinct skins

The three variants of the Water Buffalo