24
The Watch Tower is a tower in Age of Mythology. It is an upgrade of the Sentry Tower and becomes available in the Classical Age.

Watch Towers can be upgraded to Guard Towers in the Heroic Age. The upgrade costs 300 wood and 300 gold and takes 40 seconds to research. All civilizations except for the Norse can upgrade to Guard Tower.

The Egyptians get the Watch Tower upgrade for free upon advancing to the Classical Age.

Watch towers were simple structures that provided a good view of the surrounding countryside and shelter for a few soldiers. From the tower the soldiers watched for raiders or advancing enemies. Using messengers or signals of some sort, the watchmen could provide early warning to commanders. Early warning was important for protecting people and livestock, and assembling military forces to oppose invaders. 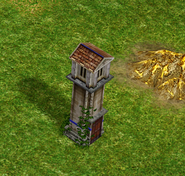 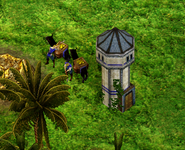 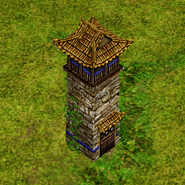 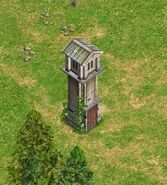 A Greek Watch Tower in the Mythic Age.
Community content is available under CC-BY-SA unless otherwise noted.
Advertisement