22 feet
The War Turtle is an Egyptian naval myth unit in Age of Mythology that is available at the Dock once the Mythic Age is reached. This unit is available only to those that worship Thoth.

Buck: knocks some or all adjacent ships out of the water, causing 100 hack and 30 crush damage. Recharge time: 15 seconds.

War Turtles are a powerful asset to an Egyptian navy. They have a massive amount of hit points, a large attack that deals both crush and hack damage, and are well armored. As such they can easily handle opposing fleets single-handedly. Their armor can soak up a lot of damage and when coupled with their large amount of health they can survive pitched battles. Their special attack sends ships flying, damaging them and leaving them vulnerable to damage for a few seconds. They are vulnerable to heroes but as a naval unit this isn't much of an issue. Unless the opposing side is playing as Poseidon, no naval heroes exist so the only real tactics are to overwhelm the War Turtle with sheer numbers, try to lure it into the range of ranged heroes or Nereids, or to engage it with powerful aerial units like the Phoenix and Vermilion Bird.

The Egyptians considered the turtle a creature of night and dark water, and therefore became associated with Set and an enemy of the sun god, Ra. They were not to be eaten or used in medicine.

"May Ra live and the turtle die." -- ancient Egyptian epithet 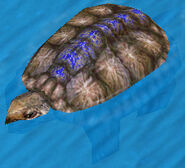 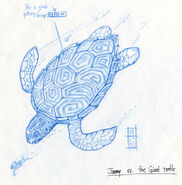 War Turtle bucking a Chinese Junk out of water
Community content is available under CC-BY-SA unless otherwise noted.
Advertisement