Age of Empires Series Wiki
Register
Don't have an account?
Sign In
Advertisement
in: Myth units, Age of Mythology, Tale of the Dragon,
and 3 more

22 feet
The War Salamander is a Chinese amphibious myth unit in Age of Mythology: Tale of the Dragon that is available at the Temple and the Dock to players worshiping He Bo.

A very notable appearance of War Salamanders is in the first scenario of the Tale of the Dragon campaign, Rising Waters. Jiao-Long, escorted by some troops meets Shun to oversee the construction of a Dam in a village that was drowned by a river flood. Unexpectedly, the camp is attacked by hostile Lizards and War Salamanders, that mostly attack from land.

The War Salamander is one of only two amphibious units in the game (the other being the Azure Dragon). Due to being able to fight on both land and water, it can fulfill multiple purposes. Not only can they be used to boost the already strong Chinese Navy, they can also be used to harass on water maps. Its strong attack and durability make it one of the stronger myth units in the game, for a very reasonable price.

Arguably the largest amphibian, the War Salamander is a giant-headed creature with tiny eyes and the strength of a bear. Its sight is not its greatest asset, but the creature is covered in sensory nodes that enable it to sense even the gentlest tremors. And while the Salamander is capable of inflicting a lot of damage, it mostly sticks to fish and insects for food.

In ancient China, the creature adopted a nickname "infant fish" due to its cries strongly resembling a weeping child. 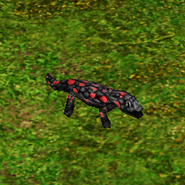 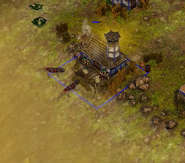 Wikipedia has an article about:
Chinese giant salamander
Community content is available under CC-BY-SA unless otherwise noted.
Advertisement