Age of Empires Series Wiki
Register
Don't have an account?
Sign In
Advertisement
in: Age of Empires III, Native Americans, Towers,
and 3 more

The War Hut is a military building in Age of Empires III: The WarChiefs that is unique to the Native American civilizations (Aztecs, Haudenosaunee, Incas, and Lakota). It combines the functions of a Barracks and an Outpost where it trains and upgrades infantry as well as attacking enemy units, similar to the Russian Blockhouse.

The War Hut is also available to the Mexicans if the player revolts to the Maya. When this happens, all existing Stables are converted to War Huts. 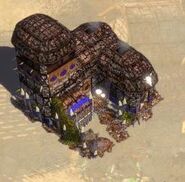 A Haudenosaunee War Hut in-game in The WarChiefs
Community content is available under CC-BY-SA unless otherwise noted.
Advertisement