16 feet
The War Elephant is an elephantine Egyptian cavalry unit in Age of Mythology that is trained at the Migdol Stronghold from the Heroic Age.

Undocumented 'Medium Elephants' upgrade (free in the Heroic Age): increases attack and hit points by 10% and Line of Sight by 1.

War Elephants are incredibly strong and can destroy almost everything in their path. Due to their large bonus attack against buildings and high pierce armor, they can act as a third Egyptian siege unit, along with Siege Towers and the Catapult. Their main drawbacks are that they are expensive (each costing 250 resources), very slow, and take up 5 population slots.

As well as being slow, War Elephants are large. This makes them easy to hit with arrows, though they can shrug them off to some extent due to their decent pierce armor. Like all cavalry, War Elephants are weaker against infantry, but due to their fair hack armor and massive hit point total, only a large group of infantrymen will prevail against them. The best way to defeat these mighty units is to use anti-cavalry units such as the Katapeltes. Failing that, myth units with insta-kill special abilities, such as the Cyclops or Medusa, can dispatch them quickly. 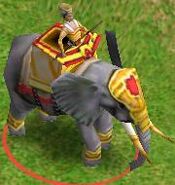 A Champion Elephant. However, infobox shows that the unit name is "Heavy Elephant", as the game was previously saved then loaded.
Community content is available under CC-BY-SA unless otherwise noted.
Advertisement