Age of Empires Series Wiki
Register
Don't have an account?
Sign In
Advertisement
in: Age of Empires III, The Asian Dynasties, War elephants,
and 3 more

The War Elephant is a heavy cavalry native warrior in Age of Empires III: The Asian Dynasties that can be trained at a Trading Post built on a Sufi Mosque settlement. The Indian civilization can also receive this unit via the Hire 6 War Elephants infinite Home City Card. It functions similar to the Indian Mahout Lancer.

The strongest native unit in the game, the War Elephant has high hit points and damage, but also low build limit. Like all elephant-type units in The Asian Dynasties, it is fairly strong against buildings.

They can be a helpful addition to the player's army if one needs an area damage-dealing unit. The result is a cost effective, population-free army of lightning-fast bruisers that can efficiently siege enemy bases.

One noteworthy use of War Elephants is for the Aztecs, since they do not normally have access to a powerful, splash-damage anti-skirmisher unit. Since the War Ceremony affects them the same as any other unit, and they have far superior hit points when compared to Coyote Runners, they can be a very powerful asset to the Aztec military.

Another use for War Elephants is to utilize them in the Commerce Age by combining them with (for example) Crossbowmen and Pikemen to form a well-rounded, complete composition. This has the advantage of entirely costing food and wood, unlike Hussars, and take 0 population instead of 2, which can save on population costs early. Of course, other civilizations can do this with their own equivalents, such as Old Han Army, Longbowmen etc. 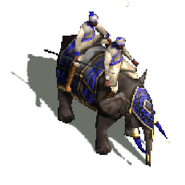 A War Elephant alongside a Mahout Lancer