The War Elephant is the unique unit of the Persians in Age of Empires II. It is a slow yet very powerful and resilient cavalry unit with an attack bonus against buildings. War Elephants deal trample damage.

Although War Elephants are tough and durable, they move slowly and are vulnerable to units that deal damage at long range as a result. As cavalry units, they are vulnerable to enemy Pikemen, though it will take a larger group to take them down. Their slow speed also makes them vulnerable to Cavalry Archers, though it will take a while for the archers to kill them due to their high health and decent pierce armor. Mamelukes, with their high speed and anti-cavalry bonus, are an effective method of fighting War Elephants.

Because they are big, move slowly and only have melee attack, siege weapons can be effective. Scorpions particularly do +6 (+8 for Heavy) bonus damage to War Elephants. Mangonels are effective against them, because the massive Elephants can hardly dodge the projectiles. They can be easily converted by enemy Monks, especially as the Persians do not have access to Heresy, so they should always be deployed with a ranged or a Light Cavalry escort. Kamayuks will also trade cost-effectively with War Elephants. Further, Flaming Camels deal bonus damage for a total of 200 damage (before armor and blast distance are taken into account) against Elephant units, and are thus extremely lethal against packed groups of War Elephants.

However, if the specific units required to counter them are dealt with, War Elephants are virtually unbeatable. This, coupled with their high durability, makes them excellent for pitched battles. It also aids them in knocking down buildings and defenses which they are virtually immune to.

As War Elephants are unique to the Persians, only technologies that are available to them are shown in the following table: 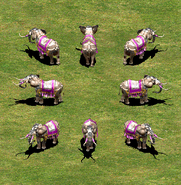 A group of War Elephants

A single Elite War Elephant can take down 100 Villagers with ease.

War Elephants in the Definitive Edition 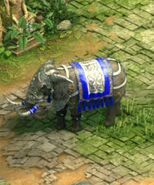 A War Elephant in the Definitive Edition 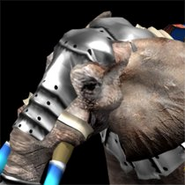 A render of the War Elephant model

War Elephant in the HD Edition and Definitive Edition

Asian elephants ridden by Persians against Armenians; from a Medieval Armenian manuscript

Karakhanid "Illig Khan", on horse, submitting to Mahmud of Ghazni, on war elephant