150 seconds
The War Elephant is a heavy cavalry unit in Age of Empires that can be trained at the Stable once the Iron Age is reached. War Elephants are very slow and rather expensive but pack a massive attack (including splash damage) and high health. War Elephants are only available to some civilizations.

War Elephants deal 5 bonus damage against buildings (to a total of 8 damage, since buildings in Age of Empires have 80% resistance to all attacks). Combined with their trample damage and high HP, this makes them a useful alternative to stone throwing siege weapons for civilizations lacking a well developed Siege Workshop.

Like stone throwing siege weapons, War Elephants do trample damage to adjacent enemy targets, although at a larger area. They are effective against infantry and cavalry but are vulnerable to conversion and quicker units that can attack at long range. Its attack cannot be upgraded and it does not benefit from Nobility; only the armor can be improved. 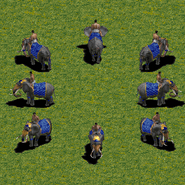 A group of War Elephants

A War Elephant in the Definitive Edition

A captive juvenile African elephant and a full-grown bull carrying a Meroitic warrior, dated between 250 BCE - 300 BC
Community content is available under CC-BY-SA unless otherwise noted.
Advertisement