Age of Empires Series Wiki
Register
Don't have an account?
Sign In
Advertisement
in: Age of Mythology, Tale of the Dragon, Chariots,
and 2 more

16 feet
The War Chariot is a Chinese cavalry unit in Age of Mythology: Tale of the Dragon. It is good against archers.

Another unusual cavalry unit, the War Chariot is rather expensive, but also very tough. It has a 25% attack bonus agaist archers, despite the fact it has a mediocre speed to reach them.

These traits might make it seem useless for a Mythic Age unit, but it makes up for it with great HP, third only to the War Elephant's and the General's (and tied with the Mercenary Cavalry's), decent attack, large bulk and great resistances, making it an excellent meatshield, similarly to the War Elephant, its closest equivalent.

Whether to use this unit or not depends on the major god, the map featured, and the preferred playstyle. For example, Fu Xi players that desire to use it should rely on large masses of foot units, boosted by Huangdi (or Sun Wukong's), Zhong Kui's, and Ao Kuang's upgrades, with War Chariots acting as "tanks". Call to Arms and Great Journey are both excellent for boosting the War Chariots, the first providing numbers, and the second, speed.

Shennong players may not seem to have much use for this unit, as their Fire Lances are a better alternative against archers, but if they worship Xi Wangmu, they can supplement their siege-oriented armies with tough-as-nails Chariots, that in turn can be supported by Shennong's excellent Monks.

Nü Wa players might be the best at utilizing this unit, and the ones with the most uses too, primarily thanks to her cheaper human units. With Huangdi and Xi Wangmu chosen, Chariots can become a part of a well rounded army, with footmen (including cheaper Fire Lances) as its backbone.

In open maps, such as Savannah, however, it is advised to try a different approach; choose Chang'e and Chongli, with Dabo Gong's bonuses boosting the economy. This combination is tailor-made for cavalry tactics; The upgrades of Chang'e favor especially Mounted Archers, whereas Chongli's Stirrup will catapult the War Chariot's HP, improving its role as a meatshield, and Jade Rabbit will improve its lackluster speed. Cataphracts and a General should also be included for additional power. 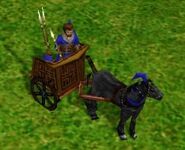 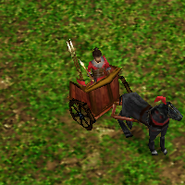