"Strong in naval combat when built in number."
—In-game description

The War Canoe is a naval vessel in the Age of Empires III: The WarChiefs that is unique to Native American civilizations (Aztecs, Iroquois, and Sioux) and can be trained at the Dock once the Fortress Age is reached. It can transport land units and gather from fishes and whales, and is the main naval combat unit of the Iroquois and the Sioux.

The War Canoe is stronger than many other ships which can be trained by the Iroquois and the Sioux, but the Aztec Tlaloc Canoe is stronger. It has an acceptable amount of hit points and can take down larger ships when massed, or through the use of the Water Dance or Fire Dance. It can also fish, though like all canoes and the Marathan Catamaran, is less efficient than Fishing Boats.

"One of the largest canoes used by Native Americans comes from the Pacific Northwest. The people there would make large dugout canoes by hollowing out the huge trees native to the region. For example, the Haida constructed war canoes from 70 to 100 feet long, which could hold as many as sixty warriors. Neighboring tribes, like the Makah, still use similar canoes to hunt whales and other sea mammals." 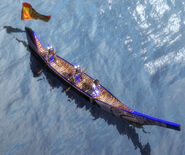 An in-game War Canoe
Add a photo to this gallery
Retrieved from "https://ageofempires.fandom.com/wiki/War_Canoe?oldid=269931"
Community content is available under CC-BY-SA unless otherwise noted.