The War Academy is a military building in Age of Empires III: The Asian Dynasties that is unique to the Chinese and is available once the Commerce Age is reached. It trains banner armies consisting of infantry and cavalry, fulfilling the role of a Barracks and a Stable, and contains upgrades for Chinese infantry and cavalry.

As War Academies unique to the Chinese, only technologies that they have access to are shown in the following table:

As War Academies are unique to the Chinese, only their cards and other civilizations' TEAM cards are shown in the following tables: 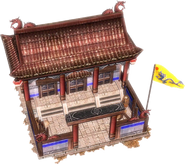