3300
The Wall of Atlantis is a type of wall that appears in some scenarios of the Fall of the Trident campaign in Age of Mythology. As its name suggests, this type of wall is found in the city of Atlantis.

Its stats distribution is identical to the ones of the Wall of Troy.

The Walls of Atlantis are completely impregnable, combining near absolute resistances (99% against all types of damage) and enormous hit points with the fact that they simply cannot be targeted by any unit, Building or god power. It should be noted that they are affected by upgrades that affect buildings and walls, so with Hades' bonus and Fortified Walls, their hit points increase further, over 4.500 to be precise.

The walls of Atlantis were constructed by expert masons, hewn from rare green granite, and imbued with chemicals not known to other nations. 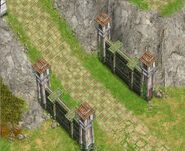 The Walls of Atlantis, as they appear in the harbor's entrance in Omens.

The walls of Atlantis, as they appear in the final stage of A Good Advice.
Add a photo to this gallery
Retrieved from "https://ageofempires.fandom.com/wiki/Wall_of_Atlantis?oldid=231864"
Community content is available under CC-BY-SA unless otherwise noted.