The Wadjet is an Egyptian Classical Age myth unit granted to followers of Ptah. It resembles a giant cobra with bat-like wings.

Regenerate at 1 HP per second.

Wadjets attack their foes by spitting poisonous spray at them, dealing high pierce damage. They make excellent support units in the Classical Age, especially when used defensively, but are vulnerable in melee situations. They are usually outclassed by stronger myth units in later Ages, though Wadjets slowly regenerate hit points over time. As with most ranged myth units, they are very weak against heroes. Doing no hack or crush damage, they are also abysmal against buildings.

A Wadjet over sand 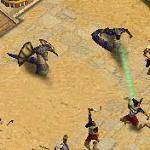 A Wadjet over snow 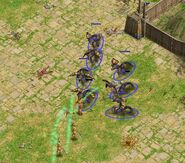