4
The Villager is a civilian unit in Age of Empires that can be trained at the Town Center. Villagers are the backbone of every civilization. Their purpose is to construct buildings and gather resources.

As indispensable as Villagers are, their fighting skills are negligible. However, they can become slightly more useful in combat once Siegecraft is researched. With it, they can be used to attack walls and towers, as they will deal 16-17 damage to walls and 8-9 damage to towers.

Villagers can be assigned with different tasks which also changes their name to the corresponding job they are doing.

When attacked, Hunters and Villagers have an increased attack strength if Zealotry is researched. But as a consequence, their gathering capacity is decreased by 50%.

Villager can build the following buildings:

Entering the cheat code medusa in the chat box turns Villagers into Medusas that turn into Dark Riders when they are killed by enemy units.

A Villager in the Definitive Edition 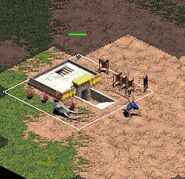 A Villager in the Iron Age attacking an enemy Storage Pit. Notice that he is using a trident.
Add a photo to this gallery

Retrieved from "https://ageofempires.fandom.com/wiki/Villager_(Age_of_Empires)?oldid=234917"
Community content is available under CC-BY-SA unless otherwise noted.