The Village is a civilian/economic building in Age of Empires III: The Asian Dynasties that is unique to the Chinese. It combines the functions of a House and a Livestock Pen, with the addition of being able to be garrisoned and serving as a drop-off point for Home City shipments.

While much more expensive than Houses, Villages provide twice the population of Houses, which can be boosted even further with Home City Cards and improvements at the Village itself.

As Villages are unique to the Chinese, only technologies that they have access to are shown on the following table:

As Villages are unique to the Chinese, only their cards and other civilizations' TEAM cards are shown on the following tables:

"During the late fourteenth century, the time of the Ming Dynasty, the Hongwu Emperor began a new policy of distributing vast amounts of land to local farmers. A product of a rural upbringing, the Hongwu Emperor favored farmers, and parsed the land, giving it to young boys who had reached manhood. To prevent the seizure of this land by corrupt landlords, he established non-transferable land titles and did away with taxation. The response was overwhelmingly positive. In 1393, the amount of land being cultivated rose drastically, at speeds never equaled by a later dynasty.

Realizing that water conservancy would play a crucial part in the success of Chinese agriculture, the Hongwu Emperor focused on irrigation. He dispatched student from the Kuo-tzu-chien, or Imperial College, to develop massive irrigation systems and develop more than 40,000 ponds and dikes. Because of his decisive actions China experienced an agricultural revolution during the latter half of the fourteenth century." 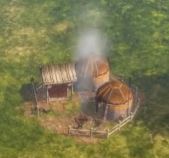 An in-game Village before the Industrial Age

An in-game Village after the Industrial Age
Add a photo to this gallery
Retrieved from "https://ageofempires.fandom.com/wiki/Village?oldid=262672"
Community content is available under CC-BY-SA unless otherwise noted.