Age of Empires Series Wiki
Register
Don't have an account?
Sign In
Advertisement
in: Age of Mythology, Tale of the Dragon, Myth units,
and 5 more

The Vermilion Bird is a Chinese flying myth unit in Age of Mythology: Tale of the Dragon that is available to the worshipers of Chongli.

The Vermilion Bird also makes an appearance as a campaign "character" in the ninth scenario of Tale of the Dragon, A Way Out. The great bird promises to guide the heroes out of the maze-like jungle, and to the Altar of Pangu for the final scenario, if they free his brethren from their captors.

Vermilion Birds summon mini fire tornadoes that do 15 hack damage and 10 crush damage per second to all units within about four feet range. Each tornado lasts 5 seconds and wanders randomly at low speed.

The Vermilion Bird is one of the strongest Mythic Age myth units in the game. Although they are expensive, they can only be hit by ranged units, have high pierce armor, and the highest number of Hit Points of any trainable airborne Myth Unit. Unlike other ranged units, Vermilion Birds don't throw projectiles at their targets. Instead, they flap their wings and the heat generates small firestorms that drift on the ground for about 5 seconds. These storms deal Area of Effect damage and will hit several targets until they vanish.

Since they also deal crush damage, the birds are very effective against buildings. A small group of them alone has enough power to quickly level a Town Center and even a few nearby buildings. As they are flying units, they can easily bypass walls and cliffs, giving less time for opponents to defend themselves. Their main weaknesses, like all airborne units, are towers and ranged heroes, as well as groups of ranged myth units, but the enemy will suffer great losses before they can kill at least one Vermilion Bird.

In a similar case with the Nidhogg, Vermilion Birds are also effective at bringing down Titans and can even destroy one with impunity, especially if used in big groups. However, the player must make sure to not have the Titan deal splash damage to the Vermilion Birds while the Titan is attacking ground troops. It is also recommended to have as many Vermilion Birds as possible in order to destroy the Titan quickly. 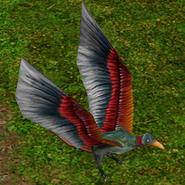 Wikipedia has an article about:
Vermilion Bird
Community content is available under CC-BY-SA unless otherwise noted.
Advertisement