Vasco da Gama (1460s - December 24, 1524) was a Portuguese navigator best known for being the first to reach India by sailing around Africa in 1499. He was also the second viceroy of Portuguese India, after Francisco de Almeida.

In Age of Empires II: Definitive Edition, Gama is depicted as a ship hero with the appearance of a Caravel but better stats. His attack consists of a barrage of bullets similar to an Organ Gun, instead of the Scorpion bolts of normal Caravels. As a hero, he cannot be converted and can regenerate health.

Gama does not appear in any campaign and is only available in the Scenario Editor. 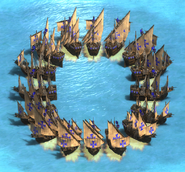 Many views of the hero unit.
Add a photo to this gallery

Retrieved from "https://ageofempires.fandom.com/wiki/Vasco_da_Gama?oldid=274809"
Community content is available under CC-BY-SA unless otherwise noted.