The Urumi Swordsman is the first unique unit of the Dravidians in Age of Empires II: Definitive Edition - Dynasties of India. It is an infantry unit that "charges" its attack over a period of time, dealing increased damage on its first attack against an enemy unit, the charged attacks also do trample damage, but not regular attacks.

The Urumi Swordsman can charge up its attack. The effective charge attack is the result of subtracting the total armor value (including upgrades) of the target unit from the Urumi Swordsman's base attack + charge bonus + attack upgrades.

Importantly, thanks to its splash damage via its charged attack, the Urumi Swordsman can defeat all other infantry in fights with equal resources, especially if they have Wootz Steel researched. Individually, they may lose against melee unique units such as Samurai and Jaguar Warriors, but in large army battles they will win thanks to their charged attack's splash damage. Even against Paladins, Urumi Swordsmen come out ahead with equal resources, though they will lose against Battle Elephants and War Elephants due to their high hit points and trample damage. Cataphracts also win against them with equal resources once all upgrades are acquired; importantly, Logistica is needed in large fights due to the extra bonus damage against infantry and splash damage. Coustilliers and Konniks can also beat them with equal resources, but the latter need to be fully upgraded first in both forms. Leiciai without Relics are evenly matched with equal resources, but with 3 Relics Leiciai start to win most of the time (is also worth knowing that Leiciai already ignore armor by design, while Urumi Swordsmen need Wootz Steel to ignore armor). On the other hand, using any kind of trash units such as Halberdiers or Hussars is a terrible choice against Urumi Swordsmen, as they'll usually be wiped out in the first few seconds of fighting.

However, to offset their devastating melee capabilities, Urumi Swordsmen are much weaker to pierce attacks than other infantry, having no base pierce armor even as Elites. As such, Arbalesters and Hand Cannoneers will make short work of them, while Cavalry Archers and similar unique units such as Conquistadors or Mangudai, as well as Plumed Archers, will be able to kite them indefinitely. Slingers will also wipe out Urumi Swordsmen easily as long as they cannot close the distance. Additionally, due to the Dravidians lacking several key technologies and having terrible cavalry, Urumi Swordsmen (and Dravidian units in general) will be vulnerable against enemy siege, including Onagers and Heavy Scorpions. However, Urumi Swordsmen are fairly fast for infantry, so throwing some melee units in front of them may be necessary to keep them away from ranged units.

As Urumi Swordsmen are unique to the Dravidians, only technologies that are available to them are shown in the following table:

The urumi is a flexible band of steel about one inch in width, and up to 5 feet in length, that is attached to a handle. Most urumi have multiple bands attached to a single handle. Because of its flexibility, an urumi can be coiled around the waist and inconspicuously carried like a belt. If a fight breaks out, the urumi can be uncoiled and swung like a sword. It is most effective when the wielder faces multiple enemies. 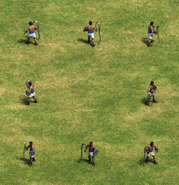