50 seconds
Uproot is a Chinese Heroic Age god power in Age of Mythology: Tale of the Dragon that is available to worshipers of Zhong Kui. When cast, it sends up roots through the Earth’s crust to damage enemy buildings. Buildings caught by the roots which will continuously receive damage for 50 seconds. The more buildings in the area, the stronger the effect.

Simply put, players can cast Uproot in an area with multiple buildings of great importance to the enemy. With luck, those buildings will be weakened enough for the player's units to deliver the final blow, or even better, will be destroyed by the roots alone. The roots will not only damage the building they surround, but other buildings close enough. So it is best to target buildings constructed close to one another. Though the roots will attack indefinitely, units can attack the roots to prevent them from destroying the buildings. Since roots cannot fight off attackers, players should always cast Uproot while attacking to keep the enemy occupied. The roots are also vulnerable to towers and Fortresses as their arrows will kill the roots before they are destroyed.

Uproot it great when used together with Ceasefire as they will continue damaging the buildings regardless of Ceasefire's effect. It is also a good combination with Frost. 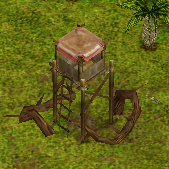 Uproot being used on a tower
Add a photo to this gallery
Retrieved from "https://ageofempires.fandom.com/wiki/Uproot?oldid=268504"
Community content is available under CC-BY-SA unless otherwise noted.