Every civilization in Age of Empires II has at least one unique unit. The Vikings, Koreans, Spanish, Incas, Indians, Italians, Berbers, Portuguese, Vietnamese and Tatars have two.

The four civilizations in Age of Mythology each have a significant number of unique non-hero human units.

Each European civilization in Age of Empires III features a number of unique units, usually similar in function to standard economic or military units common to most civilizations. In contrast, Native American and Asian armies consist of units almost entirely unique to their respective civilization. 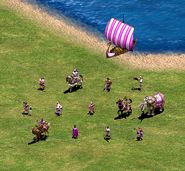 Various unique units from Age of Empires II: The Age of Kings.
Add a photo to this gallery
Retrieved from "https://ageofempires.fandom.com/wiki/Unique_unit?oldid=291617"
Community content is available under CC-BY-SA unless otherwise noted.