14 seconds
Undermine is a Norse Classical Age god power in Age of Mythology that is available to worshipers of Heimdall. When cast, it deals damage to walls, towers, Town Centers, and Fortresses. Undermine is powerful enough to destroy walls and towers of any strength instantly, leaving a pile of rubble in their place, but only deals limited damage to Town Centers and Fortresses. It has a duration of 14 seconds.

Undermine is useful when ambushing an enemy town or a group of worker units as walls and gates are regularly built to protect a town or provide a safe escape route for worker units gathering resource away from a town. If using siege weapons, the enemy is likely to have time to respond but using Undermine will destroy defenses quickly, reducing the chance that the enemy can respond in time.

Undermine must be cast onto an affected building, from where it generates an unseen area of effect, the size of which is indicated by the orbit of the Norse symbols, that slowly travels to the next closest tower, wall, Town Center, or Fortress-type building, dealing crush damage to any aforementioned building in its path for the duration of 14 seconds. Casting Undermine on a wall makes it possible for the player's army to rush into a town or makes it possible to continue chasing worker units during a raid. It is advised to target Undermine at the edge of a wall rather than its center which will remove a larger portion of it. This becomes more devastating for Egyptian, Atlantean, or Chinese players who invested a lot of resources in the many wall upgrades available to them. Undermine's area of effect is wide enough that it can destroy any tower built too close behind a wall.

Undermine will also remove towers instantly. If an enemy has grouped several towers together to protect a Wonder or Titan Gate under construction, a good amount of them can be ridden of to protect the player's army from harm when attacking. This is especially useful for Loki players planning on using Nidhogg who receives extra damage from the arrows of towers. Removing a tower protecting a group of worker units is another viable use, especially when the enemy has researched Crenellations which causes arrows to do extra damage to cavalry units, notably Raiding Cavalry who are the Norse's preferred units for raiding.

Although it does not destroy them instantly, Undermine also deals a considerable amount of damage to Town Centers and Fortress-type buildings. Weakening these large structures makes it easier for players to destroy them with a follow-up attack. Even when cast on such buildings, Undermine generates the traveling area of effect and can potentially destroy any wall or tower built nearby. 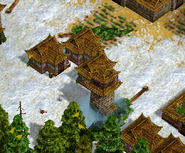 Undermine used on a Guard Tower

The rubble of walls destroyed by Undermine
Add a photo to this gallery
Retrieved from "https://ageofempires.fandom.com/wiki/Undermine?oldid=232888"
Community content is available under CC-BY-SA unless otherwise noted.