Age of Empires Series Wiki
Register
Don't have an account?
Sign In
Advertisement
in: Age of Empires II, Cavalry heroes, Dawn of the Dukes

5
Ulrich von Jungingen (1360 – 15 July 1410) is a cavalry hero unit in Age of Empires II: Definitive Edition - Dawn of the Dukes. He was the 26th Grand Master of the Teutonic Knights, serving from 1407 to 1410. His policy of confrontation with the Grand Duchy of Lithuania and the Kingdom of Poland would spark the Polish–Lithuanian–Teutonic War and lead to disaster for his Order, and his own death, at the Battle of Grunwald.

Von Jungingen's in-game appearance is largely similar to a Crusader Knight, but differs in that the crosses on his tabard and horse's caparison are gold and black instead of all black, and he wears a horned helmet inspired by the Pranckh great helm, medieval German heraldry, and artwork of the Knights, as well as other popular media. As a hero, he cannot be converted and can regenerate health.

He appears physically as the primary antagonist in the scenarios Courage and Coin of the Jan Zizka campaign, and The Fruits of Her Labor in the Jadwiga campaign. He also appears in dialogues in several other scenarios of the Polish and the Lithuanian campaigns. 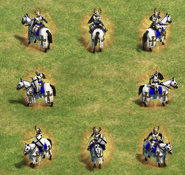 Many views of Ulrich von Jungingen