Age of Empires Series Wiki
Register
Don't have an account?
Sign In
Advertisement
in: Norse units, Archaic Age, Age of Mythology,
and 3 more

16 feet
Ulfsarks are lightly armored infantry units in Age of Mythology. They wear only wolfskins into battle and form the backbone of the Norse army.

Ulfsarks are critical in the early stages of the game, especially the Archaic Age since they are the primary Norse builders and scouts. Norse players start out with one Ulfsark. Losing this initial Ulfsark early is dangerous, as more time and resources must be spent to replace it. They are well rounded units and are good against cavalry and fair against infantry. They are also the only dedicated anti-cavalry unit the Norse possess, so they fulfill an important role in all Ages.

Ulfsarks are powerful in melee combat but will lose to counter-infantry so it is best to use them with Throwing Axemen or Raiding Cavalry. They are more lightly armored than their counterparts, the Hoplite, Spearman and Murmillo, but have a higher attack. With the right upgrades and gods, the Ulsfarks' attack can be boosted to a maximum of 16 (compared to 14 for both the Murmillo and Hoplite). As infantry units, they are weak against ranged units.

If Thor chosen as the major god, a Dwarven Foundry can be built to research technology beyond iron. With Forseti, Bragi, and Tyr as minor gods, many improvements beneficial to Ulfsarks become available. With all those upgrades, Ulfsarks will have a very high attack, high hit points, decent armor, fast speed and high rate of attack while still being cheap and fast to produce and being able to build.

Norse Gatherers and Dwarves can be turned into Ulfsarks at any time, resources permitting.

Viking warriors who wore wolf skins into battle were known as Ulfsarks, another tradition of the Berserks (bear skins). These men were renowned for their tendency to go into battle frenzy. Ulfsarks fought on foot, armed mainly with axes and swords. They generally wore minimal armor, preferring the freedom of movement rather than the heavier protection. 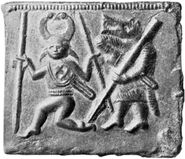 Odin followed by ulfsark; from a Vendel-era helmet plate found in Öland, Sweden.

Shield-gnawing Ulfsark ~ Berserk as a "warder" (rook) among the Lewis chessmen
Community content is available under CC-BY-SA unless otherwise noted.
Advertisement