The Uhlan is a melee heavy cavalry unit in Age of Empires III that is unique to the Germans, which replaces the Hussar, and can be trained at the Stable, Fort, and Galleon. It has higher attack but lower hit points than Hussars.

Whereas the Hussar has hit points and the Cossack (a unique Russian unit) has cost-effectiveness on their side, the Uhlan has a much higher attack than all other hand cavalry (excluding mercenaries).

From the Commerce Age, Uhlans are received from the Home City with every shipment, including unit upgrades. The only exception to this are any Exploration Age, TEAM, Uhlan and mercenary shipments; the latter two have additional units that other civilizations (e.g. German Hire Black Riders card ships nine Black Riders instead of other civilizations' seven). However, the Germans require 10% more experience points to reach the next shipment to balance this.

The high damage of the Uhlan, in addition to being a cavalry unit, allows players to use both their speed and damage to flank enemy artillery, which easily destroys the player's infantry and has very high resistance to ranged attacks. Artillery will have reduced damage against cavalry, but the low hitpoints of the Uhlan makes them unable to withstand 2-3 shots from an Imperial Field Gun. The high damage is also useful for raiding, as it takes a fully upgraded Imperial Czapka 2-3 hits to take down an unupgraded settler, although they should not attempt to do this if defensive measures have been put in place by the opponent.

As Uhlans are unique to the Germans and John Black's Mercenaries, only technologies that they have access to are shown in the following table:

As Uhlans are unique to the Germans and John Black's Mercenaries, only their cards and other civilizations' TEAM cards are shown in the following tables: 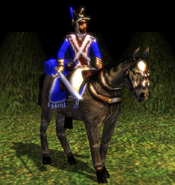 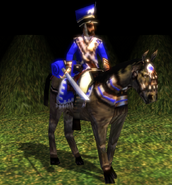 The in-game statistics of an Uhlan

The in-game statistics of a Veteran Uhlan

The in-game statistics of a Czapka Uhlan

The in-game statistics of an Imperial Czapka